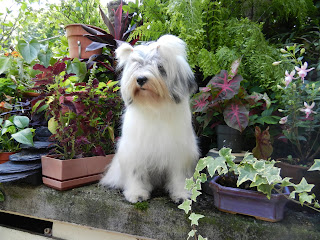 The seasons pass so quickly with little --or lots-- depending on how one reflects on the happenings. I guess much has happened...even though it doesn't seem like it. I know I've had time to take lots of photos. Little Miss Louise had to put up with several sessions. She's the most beautiful bloom in the floral arrangement at my back door. 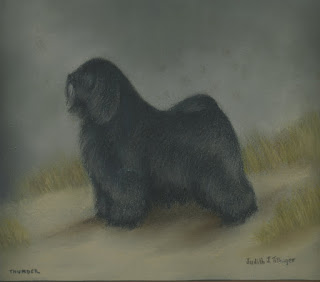 Alice Smith found a painting of a TT that was very influential in the early years of Kiara breeding. She gifted it to me because she knew how important he was. Oliver's sire, Thunder, CH Kontan Shazam's Thundercloud, was a very powerfully built Tibetan Terrier. Many of his admirable qualities were passed on to his son, and through him to the many TTs bred here. Ella, Snoopy, Kermit (all profiled in the "Looking Back" part of the website. The painting certainly captivates the eye...what a beautiful TT. 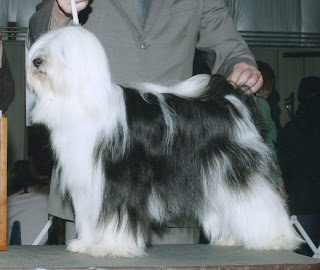 Here at home, Naldo and Passion have taken all my time at the show rings. Naldo currently needs one major to complete his AKC championship and Passion just needs hers. There are still a few planned shows to go to, so hopefully before the end of the year there may be another champion to celebrate. And attending with them on occasion are brother/sister, Q-Tip and Louise --just to get them started. Lousie has earned a few single points in the process.

Sue Meluzin has also brought her beautiful Elvira to shows. Here's a photo of Sue and Elvira at ring side.  Elvira earned a major that day.  She just needs her second major to complete her AKC championship. 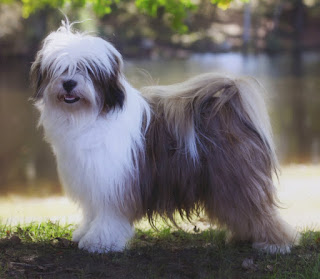 In another kind of competition, Rally, Travis reports that Cooper, CH Kiara Ewok Among Us, earned his first of three required legs his first time out at it!

He got his first leg in rally his first time in the ring.  He was actually really good at it  but distracted which my mother has to work out.   I will keep you updated.

Was a great day for her. Thank you for providing us with such a source of joy and comfort.  He is truly special. 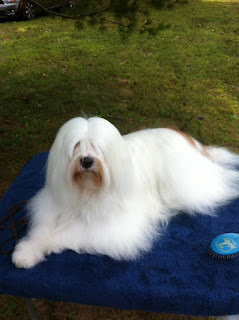 Mike McLoughlin reports about a recent win for Miss Sugar, aka The Sweetest Thing by Kiara:

Had a fun day at the OxRidge Kennel Club dog show today. Here is Sugar channeling her inner Zen before show time!


Miss Thing was retired from TT duties here and went to live with another TT relative. She went to enrich his life after he lost his other TT friend. She is truly doing well and enjoying her new home. Everyone at Kiara misses you, Miss Thing. 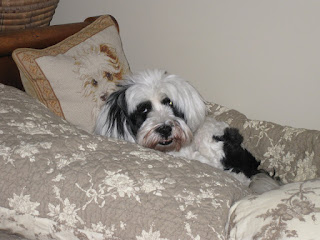 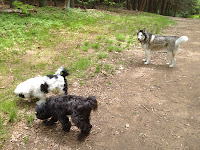 Dear Dennis,
A certain Miss has successfully passed "Come When Called" class and has mended nicely from her spay. Here she is at her first off leash walk at Appleton Farms with Jeff and her large Husky cousin from New York looking on. Hope you have a great Memorial Day.  She was a little put out when I actually let a human guest sleep on the day bed in my home office. Now that my sister has left, the pillows have been appropriately rearranged! Hope all is well with you and the Danvers gang.
Regards, Laura

Great hearing about the birthday TTs --no matter how old they get! Yes, indeed, Baudelaire was a Dream/Asland pup; he is brother to Mike McLoughlin's Sugar. 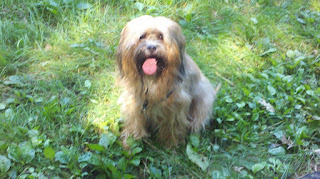 Dennis,
Here is a picture of Baudelaire on his fifth birthday. He was in the midst of his favorite activity which is running free through the woods. He is sitting here on the edge of a corn field. He was born August 21st, 2007. His father was Asland and is mother was Dream. He must be one of the five little pups with his four sisters in the picture you have in the archives of Dream and her litter in the Summer/Fall of 2007. Perhaps he is the one lifting his leg. He is a wonderful dog and very much how you describe his father. Definitely his own man always. I tell him sometimes that he could have been a famous show dog but he reminds me that he loves the freedom he has in the woods and fields and streams of Vermont.
Paul

And Baudelaire's half brother had a birthday too. Linda posted her loving sentiment on FaceBook. It resonates so much for me because I felt the same way about Their dad, Asland. Glad he was able to make the kind of contribution to the breed that states so much about the temperament of his children. 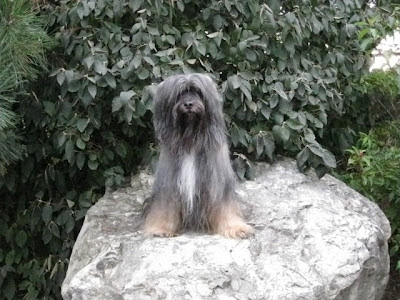 "Today my first Champion turns 14 years old. I couldn't have asked for a nicer guy! Echo was my first titled agility dog too although he didn't enjoy it like Zoe does. He is one who loves to be with me and snuggle. He loves his walks and always wants to go further! He knows Paul and I both can use the exercise. Happy Birthday Echo!" 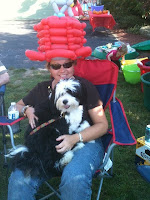 Tashi enjoyed his 2nd birthday with much festivity. Bob sends a photo of the occasion. Looks like they were having a celebration.

And the news comes in from distant locations. Kathleen Kelley, although living in Florida, still tries to keep in touch to check on her little contribution still left here: Passion. Passion is a great-granddaughter of her Katie and granddaughter of her Willow. She writes about her Willy: 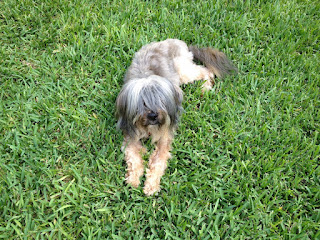 Hey Dennis,
Willy is still a good-looking dog --for a soon-to-be fourteen year old. Despite a hearing loss, he still loves playing with the others and running around the yard -- And he still loves to pose for the camera! Hope all is well with you. Kathleen


And some times sad news comes in wrapped in so much joy and love in the rememberance: 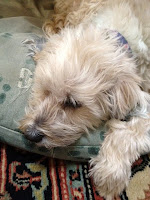 Hi Dennis,
You probably don't remember me. My parents and I got my furry best friend from you in February of 1997. His name was Dudley but you referred to him as Mr Specs because of the tan around his eyes that made him look like he had glasses. I am writing to you to inform you of his recent passing. And also I want to thank you for providing a wonderful family companion. He gave me and my family so many wonderful and humorous memories. He truly was a great guy. Dudley will forever hold a special place in my heart. Looking forward the future, I am now 26 and in a couple years l plan to get another Tibetan Terrier as I have fallen in love with the breed. I have attached a picture of Duds that was taken a few weeks before his passing. Also sending along another from when we brought him home. Thank you and I hope you have a wonderful summer!
Best, Erin McGovern 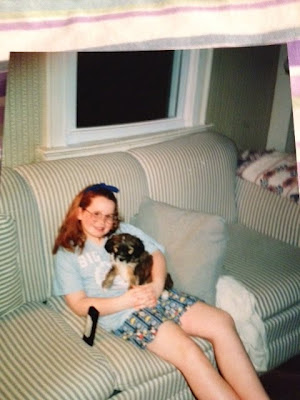 And even the locals with Kiara TTs keep me posted. Another "getting-older" TT, Monty, still keeps his owners on their toes. Longevity tends to be a trait many TT lines seem to enjoy. From these notes, I'm happy to hear that some Kiara TTs enjoy it as well. 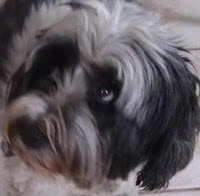 Monty my little scamp is right here next to me. He is doing great, getting older but doing great. hope all is well with you.

There haven't been many newbies born here this year. But there was one: a singleton pup. And it's not unlike having a litter of eight...he was just as much work, so became known as my little Trouble. Always underfoot from a few weeks old, he became an endearing sidekick of my every activity. Whether I was housecleaning, weeding the garden, or training another TT, the little guy was right there. So it's good to get a note and photos from his new companions. 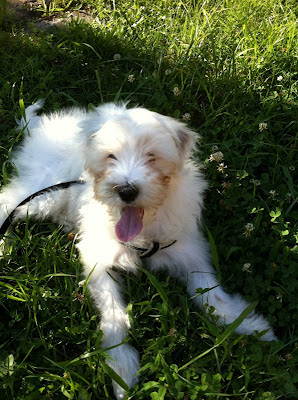 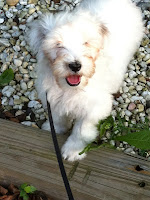 Felix has had a great week with us. He's doing really well with house training and is beating the heat by spending time in the AC. He loves his dog walker who walks him when we're at work full days. 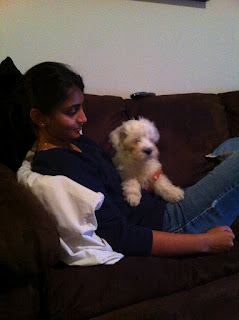 He has met neighbors and their pups on walks and is appropriately playful and friendly :) We just adore him and he's settling in nicely! Thanks again for letting us take him home! I have a few other photos to send along from my regular computer. A day in the life (or a few) :) The sleeping photos were after a long afternoon of play with his labradoodle mix friend and another day of fenced-yard romping. Thank you again for this wonderful boy! 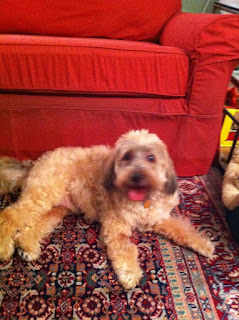 And lastly, a little sad news. Sandy sent her news that her Kasha pasased over the rainbow bridge. He was seventeen years old and until the end, a special gift of joy for her. Kasha's TT friend, Little Mini-Claire, misses him as well.

I cannot end with sadness, but with expectant hopefulness. 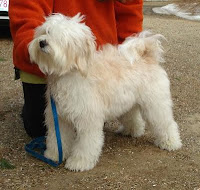 Our Rosie is ready to bring us a bundle of pups. We tried breeding her with Echo, an Asland son last year, but the timing was unfortunate and we missed. This time around, Echo's son, Samye, was selected to sire a litter --and all is as planned. We look forward to this for many reasons. Rosie was imported several years ago to enhance the current Kiara TT lines and also to start a Lamleh linebred line at Kiara. This litter will do that.     Samye 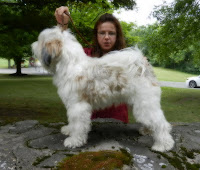 And now they're here to do just that! 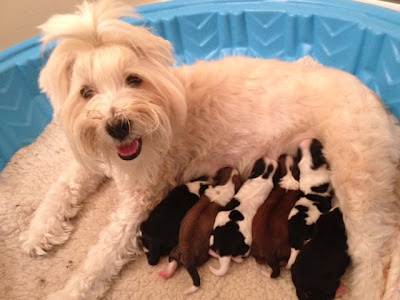 Keep me posted. I love hearing from everyone.
More later.

Posted by Kiara Tibetan Terriers at 12:17 PM No comments: