I was lucky to be able to attend the Tibetan Terrier World Congress 2007 in the United Kingdom. It was fun connecting with friends I made there many years ago when I was the first American to attend a TT World Congress.

That was the third Congress held to celebrate our breed. (See article I wrote for the Mollosser Magazine about that Congress.)

And this, the 10th Congress, was no less inspiring than the first one I attended. The logo for the Congress was exemplary: simple but it screams 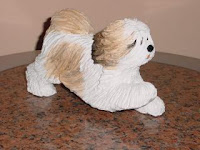 Tibetan Terrier, and very unlike the busy one we have seen recently for our own Specialty. (I wrote an article to be published in Tibetan Tails. Additional photos of this Congress are also available.) Look at the beautiful sculpture I purchased from a Swedish artisan. 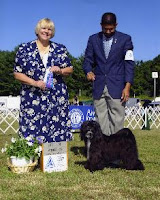 Good news comes from many TTs and their proud owners. Kappy owned by Debbie and Jim Griffiths is now Champion Kappy. He finished his championship in New Hampshire – his home state! He is happier now that he can frolic more in the meadow and get groomed less to keep “that look”.
Pat and Richard Sutton’s Lacy completed her championship as well. Her Grandmas here at Kiara, Bubble (maternal grandma) and Sophie (paternal grandma), are very proud of their granddaughter – as well as impressed. Just look at that gorgeous dress!!!

Sue sends a photo of a new resident at Zin-Pa. No, she is not a TT. Why, look at those ears! Her name is Storm -- heaven help the TTs. The new wee-one TTs, Floyd and Elvira, give her lots of space.

And other good news comes from the Canadian TT Specialty. Linda Mildith has good news about her Asland son, Echo. He helped win the brace award that day. Here they are: Linda, Echo, and Zoe. Everyone looks pleased with themselves. Good going!!!

And Jack – of Jack and Jill -- earned his first major down south with his friend and owner, Linda Hargis. Haven’t received any photo to show him off…but guaranteed I’ll hound Linda til I see one!

At home Dream and Asland produced a fine brood of little golden babies. Yes, that’s one white one! But even she has golden patches.

Posted by Kiara Tibetan Terriers at 2:39 PM No comments: