Pat has been looking forward to this litter because it brings together Buffy and Josh. Faith Lowell (flowell@together.net) reports that Dimple and my Yogi brought four new TTs into the world. Mike McLoughlin’s Sadie bred to Karen Didricksen and Faith’s Deli (formerly Fidel) had five new beauties (mcloughlin@aol.com). I had the privilege of helping out bring these babes into the world. These two stars from the litter are two that have been making Mike's choice hard to make. 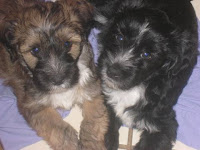 And most recently, in NYC, Sue Meluzin’s Jilly gave birth to four. (zinpatt@aol.com). Again Tag is the proud father of this brood. Congratulations of your litters and thanks for bringing so much to the breed by way of these breedings. 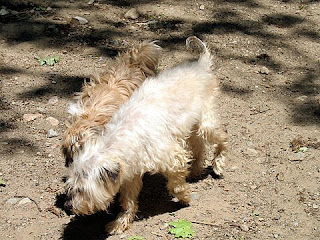 In the TT yard, we had a visitor. Ken brought Sunny down to meet dad. Asland, dad, recently turned that corner from youngster (at heart anyway) to the-old-man-in-the-yard. At his advanced years, he’s doing really well. Hopefully he may make one more mark on the Kiara line…only time and a sperm count will tell. 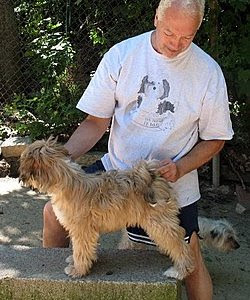 It was a wonderful meeting and Sunny is a shining example of the lovely qualities Asland has brought to Kiara. He has a sunny disposition (greatest temperament) with an effortless gait because of a proper construction, all contained within a handsome exterior. He is a credit to his dad and also to his mom, Flame.

Sunny met some of his family. And Ken said it best:

Finally had a chance last week to head down to Danvers MA for Sunny to meet his Dad Asland and for me to visit with Dennis Gunsher.

After having Afghan Hounds and seeing what they look like when they have to be shaved down Sunny's Dad was not at his best as he had just been clipped down. He is fifteen years old but to see what a handsome dog he is in full coat you can go to Dennis's site. 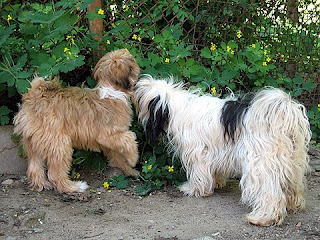 Upon arriving to have Sunny meet his Dad, Dennis had all of his dogs come in from their play-yard. Dennis has created a Tibetan landscape which takes a little thought to realize their natural habitat is rocks and gravel. One female decided she wanted to stay out so Sunny had, I guess, his first date.

And more news from up north…another Asland daughter was romping around at Debbie and Jim Griffiths’:

Dennis,
This is Annie. She lives in Burlington VT with Jim’s brother. It’s an early summer shot in our yard while she was playing with Kappy. I’m sure you’ll agree, she’s a real beauty! Kappy thinks so too. My understanding is she is now wearing a summer cut. We’ll get to see her again in a couple weeks. Hope your summer is going well. Kappy want you to keep him in mind for a future breeding.
Kappy, Jim & Deb & Snuggy

Besides the numerous pics Mike has sent of Sadie and the pups, he forwarded this beauty of Sugar. Sugar is Annie’s sister. And like her sister, Sugar is maturing nicely. Besides proving how beautiful she is on the outside (so obvious looking at her photo)…she proves every day how beautiful she is on the inside. She loves be the puppy sitter …taking over when mom tires. 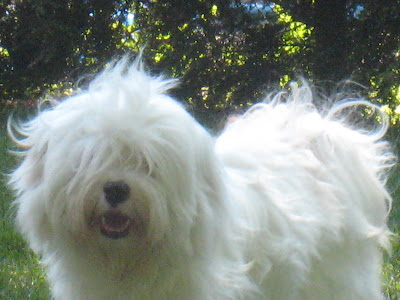 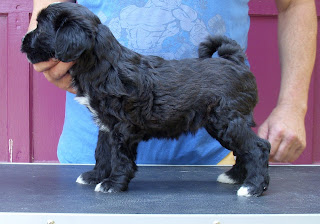 Here at home the newest "great expectation" is little Willow and Yogi’s daughter, Molly, Kiara Fire Down Below. She went to live the Glascos and their older TT in Michigan. Molly is quite the little package and we look forward to hearing about her progress in the future.


And as always there is some show news. Recently at the Bay Colony Tibetan Terrier Club Ninth Annual Specialty the Kiara clan was well represented. Fortuitously winning a 5 point major, Kiara Lightning Strikes walked away with the Winners’ Dog prize.  That came with numerous stuffed toys -- much more to his liking! 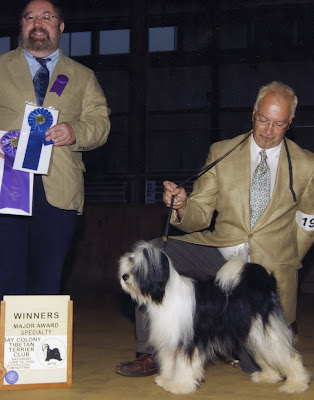 Lightning’s mom, Goodness, is now CH Kiara Simply Irresistible. Had to grow her coat back after having her litter that brought us Thunder, Lightning, and Rain. But it grew back ever so nicely. 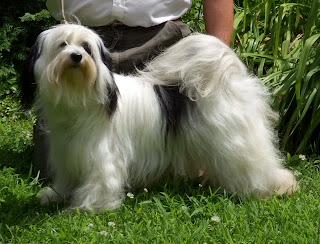 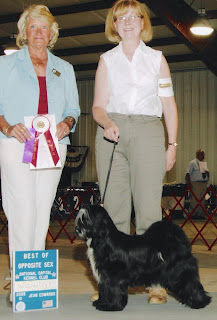 Lightning's cousins Elvira and Floyd showed very well at the Bay Colony Tibetan Terrier Club Specialty weekend too. A few weeks later, Elvira did some winning of her own. The 4th of July weekend was hers! She and her companion, Susan Meluzin, were in Maryland garnering wins. Look at this beauty! 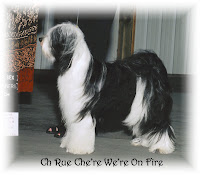 And last but not least, Cheryl Zahradka and Flame (mom) are proud of Blaze. Blaze completed his championship recently out in Minnesota. What a handsome TT he is!